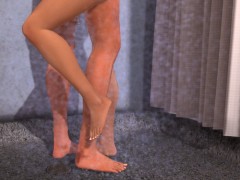 The 3 parts of the shower, curtain, rod and base together, the shower itself and the soap holder. can be unlinked.

REZZING AND FIRST USE

Give the engine and the scripts some time to load, it will take a bit of time. When it is finished, the water turns on automatically when you sit on the shower.

Water, security, poses and facial expressions can be adjusted under the ADJUST menu.

• Water: choose between 4 different sounds, adjust the volume or turn the sound completely off.

• Security: makes your furniture usable by Owner, Group or All.

• Faces: turns facial expressions on or off. (Does not work if you are wearing a mesh head.)

ADJUST ALL ANIMATIONS TOGETHER IN HEIGHT

The engine of the shower is in the main prim, the shower itself. Rightclick the whole shower and choose edit, edit linked parts, then click on the shower part itself. Unlink it.

Sit on unlinked shower part and then adjust it until you and/or your partners avatars feet just about touch the floor. Step of it.

Now, hit control alt T and find the invisible disk, near the shower head> It should lay over the shower head. If not, rightclick the shower again, choose edit, edit linked parts, and move it to where it should be.

If one of the sitters is wearing an Aeros cock, you’ll be benefited of the automatic tilt set feature. This feature will change the tilt of your cock to adjust the best possible to each animation. In order to have it working, you need to change one setting in your Aeros cock.

Touch your Aeros cock to get the menu. If the cock is hidden, show it with the HUD.
Click “Devices” on that menu, then select “Auto” mode.
Make sure that “Level” (also under the “Devices” menu) is set to at least 2.

IN CASE OF PROBLEMS

You can reset the scripts by rightclicking the shower, choose edit, then go to the Build menu in the top bar of the viewer, choose scripts, then reset scripts.

Or take the shower back in inventory and rez it again, this will reset the scripts as well.